The new online store is here!

EATING WITH THE
SEASONS

WHAT'S IN SEASON FOR SPRING?

I'm a designer, creator, cook, and gardener living in Vermont. A Cultivated Living is where my life in design meets my love of cooking. Here I share inspiration and recipes for a healthy home, garden, and life... focusing on delicious, shareable low carb and keto meals. When I changed my eating, it changed my life. Find out how here:

INSIDE VILLA MANDRA: A SUMMER HOME IN MYKONOS

HOW TO MAKE
LABNEH

Why start your day with a hydrating tonic?

Truth be told, I am not one who gravitates towards anything but a large cup of coffee first thing in the morning. It is one of the first things that I think about when I wake up. But years ago I realized that one of the best things that you can do for yourself is to start your day by drinking a large glass of water first thing. Lukewarm water is even better so as not to shock your system. So for years I did that… and it was fine. I was more hydrated. I could check off one glass of water first thing so I was already on my way to eight or whatever the correct number was at the time. It was fine… but it was not great. I knew there had to be a better way.

Why water alone is not enough

Water alone does not replenish the electrolytes and minerals which you have lost throughout the day, and night. But by adding a few key ingredients, you can supercharge your water to help it replace what you have lost, hydrate you better, and help you absorb what you are missing.

Over the years I have played around with amending this and drinking this. I have added lemon and apple cider vinegar, sometimes honey, sometimes cayenne pepper. Truth be told some days I just reached for my coffee first. Then something changed. Me I guess.

At about the same time I started to follow the keto diet, I also started going to hot pilates classes three to four times a week. This surprised me because my former self was convinced that I would not do well in the heat. It seemed like a surefire way to end up with a migraine. But as I mentioned earlier, once I started eating a low carb keto diet, I stopped having migraines… and as it turns out I absolutely love the heat.

Where am I going with this? As I was now exercising in heat (96-106°F), I was sweating more than I knew I was able to. Have you ever done this? (Let me know below.) So it became essential for me to replenish what I lost and to start my day completely hydrated, because there will possibly be intense exercise later in the day (and definitely coffee and wine).

So back I went to perfecting my morning hydrating tonic. To the lemon, apple cider vinegar, and cayenne pepper I added Himalayan salt to help replenish the minerals which I had lost.

Then I found my game-changing ingredient. In one of my new favorite cookbooks, The Mexican Keto Cookbook by Torie Borrelli, she has her own version of an Alkalizing Morning Drink. In it she suggests adding Ceylon cinnamon which is an antioxidant which helps balance blood sugar (especially after coming off of a fast or if practicing intermittent fasting). So I tried it. The result? I loved it. Not only for the flavor, but for the feel.

How A Daily Hydrating Tonic Will Make You Feel

My morning “tonic” makes me feel refreshed, balanced, and hydrated in a way that water alone just does not do. I can’t recommend it enough.

If you make this Morning Hydrating Tonic be sure to leave a comment below! I’d love to hear from you. And if you do make this recipe, don’t forget to tag me on Instagram! 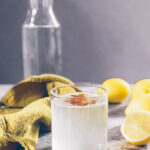 Better hydrate, detoxify, boost your metabolism, and feel amazing. I have never felt better than when I start my morning with this Morning Hydrating Tonic Drink with Lemon, Apple Cider Vinegar, Cayenne, Cinnamon, and Himalayan Salt.

In a large glass, stir together the water, vinegar, lemon, cinnamon, cayenne pepper, and salt. Enjoy! It’s best to drink slowly for better absorption, but I won’t tell, I sometimes drink mine all at once and still feel great.

Net Carbs = 2 grams. If you aren’t used to drinking vinegar or cayenne pepper or salt for that matter, this may be a bit of a flavor surprise. It may take a little getting used to – but for me, what was unusual at first has become an addiction. I can honestly say I feel a big difference when I have this in the morning versus just a glass of water.

What Did You Think?

WHAT TO COOK TONIGHT?

« Why Did I Choose The Artichoke? Symbolism, Nutrition & More

Inside Villa Mandra: A Summer Home In Mykonos + How To Bring This Style Home »

Grown And Nurtured.
Refined In Taste.
Meaningfully Made.